There’s an uncharacteristic quaver in Jamey Johnson’s baritone when talking about the last song he ever wrote with Jason “Rowdy” Cope, his longtime friend and bandmate.

That song, “All of Your Stones,” ended up becoming the title track of the new album by Cope’s band the Steel Woods. Released last week, the LP is an unexpected tribute to the Southern-rock group’s lead guitarist: Cope died from complications related to diabetes in January. He was only 42.

Johnson pauses to collect himself and goes on to explain, in a near soliloquy that dramatically rises and falls, how “All of Your Stones” is a testament to how he and Cope overcame respective bouts of self-sabotage. Prior to co-founding the Steel Woods with singer Wes Bayliss in 2016, Cope played guitar in Johnson’s band for nearly a decade and appeared on the outlaw country singer’s revered albums That Lonesome Song and The Guitar Song. On the latter, he co-wrote the brooding “Can’t Cash My Checks,” about a farmer forced to grow pot to make ends meet, and delivered a searing solo on the gospel-tinged “Macon.”

“We’ve had a lot of conversations about where our hard livin’ years had gotten us and the kinds of relationships that it probably cost us by being drunk all those years. By being high. By not really paying attention to the things we should have been paying attention to,” Johnson says. “And one of the things we both kind of marveled at is the idea that even through that, God used us. So you’ve heard the phrase ‘People in glass houses shouldn’t throw stones,’ right? Our house isn’t glass anymore. It’s made from all the stones people threw at us. It’s made from all the judgment that was cast down on us. Some of it due and some of it probably undue. But either way, we were somehow able to make something good out of it.”

For Cope, who earned the nickname “Rowdy” for his wild-eyed, unpredictable persona, those good deeds and small victories were hard won. A native of Black Mountain, North Carolina, in the western part of the state, he struggled to make it for years on the Los Angeles music scene, moonlighting as a roaming performer at a Sunset Strip country bar with guitarist Leroy Powell before moving to Nashville. Together they’d take requests and fire off covers of “The Devil Went Down to Georgia.” Proud of his Southern bona fides and determined to prove he wasn’t an actor playing a part, Cope would sell customers moonshine that he bootlegged from North Carolina to California in his grandmother’s car, disguising the white lightning in water bottles.

“It was his side hustle. He’d meet these patrons and they’d be like, ‘Y’all are the real thing, aren’t ya?'” says songwriter Brent Cobb, who crashed on Cope’s couch when he followed his cousin, the producer Dave Cobb, to L.A. “He was like, ‘I’m so real that I’ll sell you a jar of moonshine right now.’ He was just cool as shit. The realest of the real.”

Cope’s death early this year blindsided those closest to him. He had been sober for three years and was freshly focused on his health, dutifully managing his Type 2 diabetes. “The dude was like clockwork,” Cobb says. “He would eat his meals correctly and he wasn’t drinking. He was on top of that.”

Cope received his diagnosis in 2018, when he temporarily left the Steel Woods to seek treatment for heavy drinking. But, tragically, the damage of living for years with unchecked diabetes was already done — the disease took his life in his sleep on January 16th, 2021.

“It’s one of those things, man, that I just didn’t believe it for a couple of days,” Bayliss says. “It’s like trying to wake myself up from a dream.”

An Alabama-bred singer/multi-instrumentalist with a drawling Ronnie Van Zant voice and a love for classic country and Lynyrd Skynyrd, Bayliss first met Cope in 2015 at a bar they were both playing in Dickson, Tennessee, in the hinterlands outside of Nashville. In Cope, Bayliss found the Gary Rossington to his Van Zant, as well as a way out of the solo artist grind. 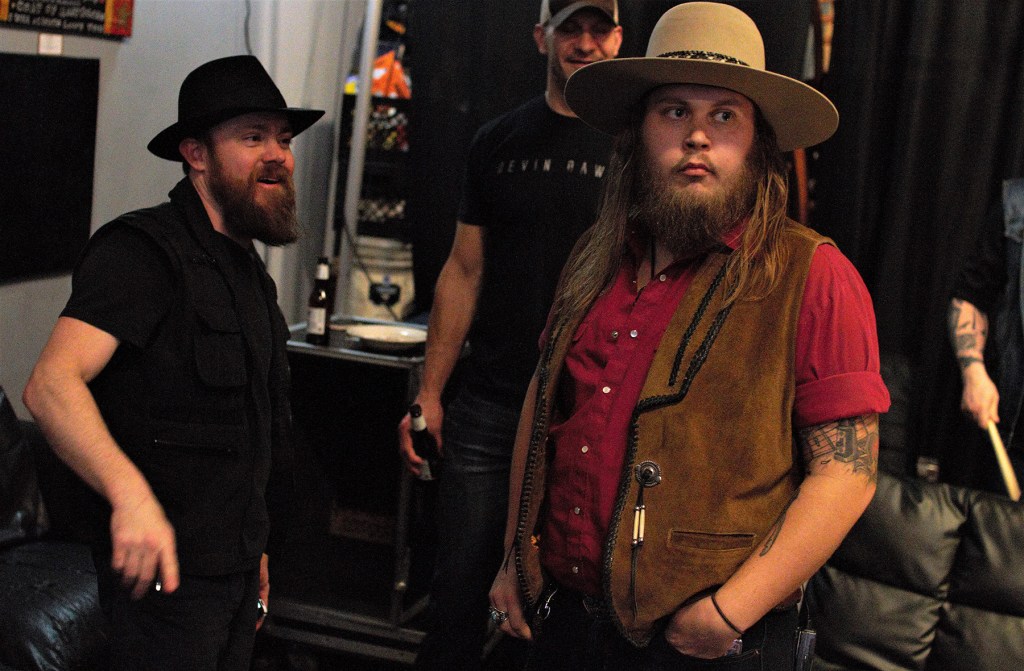 Jason “Rowdy” Cope and Wes Bayliss backstage at a Steel Woods concert at 3rd & Lindsley in Nashville in 2018.

“I didn’t really want to do the solo thing, which is what everybody moves to Nashville to do,” Bayliss says. “So when we met and [Rowdy] brought the idea [of the Steel Woods], it was like music to my ears. I just wanted to be a part of a band and he was able to get his artistic side out. I guess being just a guitar player until then for other artists and whatnot, it had handcuffed him. He had a lot of pent-up creativity that he wanted to get out there.”

At the time, Cope was still playing with Johnson and he gingerly approached his boss with news of his departure. “He came to me one evening and broke out a pint of whiskey. He said we needed to talk and I thought, ‘Oh shit, what’s happened now?'” Johnson says, laughing. “He said he needed to leave the band and he was gonna start this other band. I couldn’t have been more proud. I loved the fact that he had enough drive and enough ambition.”

Despite their 13-year age difference, Cope and Bayliss spoke a similar musical language in the Steel Woods — even if the elder Cope was just as passionate about hard rock and heavy metal bands like Led Zeppelin and Black Sabbath as he was about the Allman Brothers and the Eagles. “Rowdy grew up with metal. He was a metalhead through all of his teenage years and he could play, like, Pantera,” Cobb says. “He knew thousands of songs.”

On the Steel Woods’ 2017 debut, Straw in the Wind, he persuaded the band to cover Black Sabbath’s “Hole in the Sky.” For 2019’s Old News, Cope had them record the British metal pioneers’ “Changes.” They tackle one of Bayliss’s favorites, Skynyrd’s “I Need You,” on All of Your Stones, reimagining it as a duet with Ashley Monroe. On all three of those covers, as well as on Steel Woods fan favorites like “Axe,” “Straw in the Wind,” and “Anna Lee” (part of a multi-song murder narrative that concludes with the cinematic “Cold” on All of Your Stones), it’s Cope’s supple, emotional playing that is the through-line.

“He was a natural bridge between feel and technique,” Johnson says. “You know, some people, they work on technique all the time and then when they play, you kind of feel like somebody’s been doing a bunch of math. With Rowdy, he understood the technique, but when he played, it just poured. It flowed. It was so easy. It was so smooth. And you never knew what part he was going to drum up.”

Cope was so experimental and eager to try wildly different guitar parts, oftentimes in the same song, that Johnson devised a game he called “Lead Guitar Baseball” to critique and guide his guitarist. He tested it out while Cope was wrestling with the solo for “Macon.”

“He’d play a pass, and we’d let him know if it was a strike or a ball or a foul. It was this idea of us being the umpire. He would get a little frustrated with his playing …and I knew that once he got frustrated, he was focused,” Johnson says. “The next thing we heard after that was the lead that you hear on ‘Macon.’ And that was just extraordinary. He played it just so natural, but it was intense. It was like he was forcing it all out at one time. When I listen back to it now, I go, ‘Damn, man.’ If I had to sit and learn that, I’m not sure I could learn that in a week.”

“He wanted to be Ralph Mooney, the steel player for Waylon’s band, and he was just the biggest student of him and he wanted to play like that,” says Cobb. “He developed this sound that is like chicken-pickin’, but also like a six-string playing steel parts at the same time. And he would just be a freak about his volume pedal to give it that steel swell. He came from a metal background, but he could play guitar like a steel player.”

Onstage, the Steel Woods were a potent — and teeth-rattling loud — force. Bayliss is also a fierce guitarist and the interplay between him and Cope, pushed along by the chugging, sometimes sludgy rhythm of bassist Johnny Stanton and drummer Isaac Senty, made for epic moments of tension and release. The Steel Woods are carrying on in Cope’s memory and have already played shows with new guitarist Tyler Powers, who first stepped in when Cope was in rehab.

“There’s of course no replacing Rowdy, but [Powers] is really just what we need right now. He’s a killer player and I don’t foresee anyone else in that seat for a long, long time,” says Bayliss, who unknowingly eulogized his bandmate when he wrote the ballad “Ole Pal” for All of Your Stones. It isn’t about Cope, specifically, but it’s hard not to hear it as such when Bayliss mournfully sings, “Ole buddy, ole pal/if I could call you up somehow/I’d lie and tell you that I’m getting by/without my best friend.”

“I wasn’t writing about any one person, but it is crazy that it just kind of flowed out of me way back then,” Bayliss says of the song, which he wrote while Cope was still alive. “Everything was really in line. And now all of a sudden it’s in perfect line.”

With hindsight, Cobb sees a lot of knowing signs from Cope, especially in the smooth integration of Powers to the band’s lineup and in key collaborations on All of Your Stones. “It seems like he prepared everybody to go on without him,” Cobb says. “It’s wild that he made sure to write another song with me for this record [“You Never Came Home”] and with Jamey too. He always had his feet on the ground and head in the clouds. I don’t know how superstitious I am, but Rowdy was.”

Whether Cope truly felt his time was coming or not, he consciously dedicated his remaining years to living down his nickname. While getting sober was the high point — “He celebrated his sobriety. It was something he was proud of and he earned it,” Johnson says — he petitioned guitarist Leroy Powell to delete a series of old YouTube videos in which he and Powell pretended to be feuding pro-wrestlers. Cope had just started teaching guitar lessons to kids and he didn’t want them to find the videos online and be afraid of him.

“Even though it’s just him pretending to be wild and crazy, he cared about that stuff,” Cobb says.

“He really was the un-Rowdy for the last couple of years, being sober and making sure that everybody else was in line,” Bayliss says. “I think that’s what he would want everybody to know: that he didn’t go out in a bad place.”

Johnson echoes Bayliss’ sentiment. He says his friend left this world happy and satisfied. “He killed the dragon. The thing he reached for, he obtained,” he says.

Most importantly, Cope found a use for all of those stones. He built himself an unshakeable legacy.